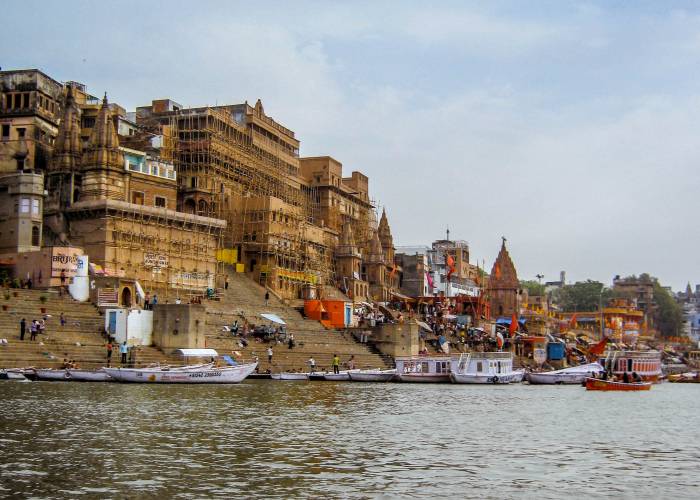 The Varanasi city Uttar Pradesh has many names Kashi, Banaras, and Rudravasa being a few of them. Maybe because it is not a city but a living legend, changing forms over its 5,000 years of life. Yes! The city of Varanasi is the oldest living city in the world and is of immense spiritual significance in Hinduism.

Once upon a time, a budding center of trade, commerce, and arts that were renowned worldwide. Today those arts are disappearing and fast becoming the dying arts of Banaras. So why not witness these offbeat experiences in the nooks and gullies, filled with ancient art forms and hidden gems across the varanasi city? These offbeat experiences will take you on a ride to the different side of Varanasi that is rarely explored.

Just in case you were wondering about the local immersive experience and how to best experience the legendary city of Kashi come, and join us at Moustache Varanasi for a leisure stay and a mingling experience with travelers from different walks of life. And, precisely that’s what all Varanasi is about!

Moving on, check out these rare experiences beyond the Banaras temples, its Chaat and Ghats, its Celebrations, and Cremations.

The Dying arts of Banaras

The Banarasi Silk during its pinnacle was a sought-after good, worn by elites, Kings, and Queens all over the world. It was considered more precious than Gold at one point in history. Well, such was the detail and artisanal mastery of the weavers of Banaras Uttar Pradesh. They even used to fuse the cloth with Gold & Silver threads in clothes made for the elites.

Sadly, that fabled old art of weaving Banarasi Silk Saree is dying and only a few such weavers remain. You can find the humming of old looms in the gullies of Weaver’s colony. You will be welcomed by the sight of gentlemen performing an intricate dance with hands and feet at old-school loons weaving the almost lost art of Banarasi Silk.

India is full of such ancient marvels. And if exploring these hidden treasures piques your interest.

The Ghosts of the Ghats

Don’t be scared! We are not talking about actual ghosts here. But if you are looking for an offbeat experience in this ancient fabled varanasi city. According to the locals, you must visit the Ghats at night. Or NOT!

After the hustle and bustle of busy ghats full of devotees and tourists, Sadhus wither away after the Ganga Aarati at Varanasi Temples. One could feel the true peace of the Varanashi Ghats at night. The Ghats bring out new heavy energy, with their silence and the Ganges reflecting city lights.

For some, it can get eerie but it is an offbeat Must-Do experience, nonetheless. Good thing that you can visit the Ghats with your gang, and experience the heavy energies at the Ghats of Banaras.

With walking distance from the ghats and plenty of like-minded travellers around. Gather your gang and experience this offbeat journey at the melting pot of the best hostel in Varanasi.

The epicenter of Spirituality, Trade & Arts

What is so special about this place that still after 5,000 years it is attracting people from all over the world? Maybe it’s the strategic location on the Ganges river meeting with the two rivers of Varuna & Assi, but FYI, there is no such thing as the Varanasi river. Maybe it’s just a blessing from the Gods themselves. But the time-tested truth is that this ‘older than time’ city has been the epicenter of not just Hindu Spirituality. A lot of religions gravitated toward this mystic city like Buddhism and Sikhism.

Yes! You can experience the roots of Buddhism found here, where Lord Buddha gave his first sermon in Sarnath, on the outskirts of the modern city of Banaras.

Furthermore, Shri Guru Nanak Dev, founder of the Sikh religion found a great deal of inspiration while visiting Varanasi. You can find many such gems, like the Korean Temple and a Buddhist learning center called Vajra Vidya Temple also known as the institute of “Indestructible learning” in Sarnath. If you are seeking more than religious significant destinations.

Along with its religious and spiritual epicenter, here you can also experience some timeless arts. Countless, Persian, Tibetans, and people from all over the world came to Varanasi to pursue their traditional arts and also innovate. Arts like Gulabi Meenakari, intricate metalworks, and the legendary silk of the Banaras city are sought-after commodities all over the world. You can find these gems hidden all over the oldest living city in the world.

A City for the Seekers

Varanasi has always been a destination for seekers. Being one of them, you should know that many famous personalities like Mark Twain, Julia Roberts & Brad Pitt visited this holy city. Even today, you can find numerous foreign tourists seeking spiritual revelation, and a taste of the ancient and hypnotic energies of Varanasi Mandirs and its ghats.

It has evolved to be a world-famous backpacker’s paradise along with a religious pilgrimage destination for countless Hindus. The celebrated Hollywood actor Brad Pitt also said, “I found Varanasi absolutely staggering. I have never seen anything like it before. The city just spills into the river Ganges…It’s really extraordinary!”.

The lifeline of the region, the holy and mysterious river Ganga or The Ganges is a river so holy that some devotees spend their life praying to this mystic river. They go on arduous journeys like Ganga Parikarma. A journey spanning the entire length of the river Ganges, from glacial height to Rishikesh, Varanasi, Kolkata and ultimately merging with the sea. If you truly want to understand, why the Ganges is not just a river but prayed as a Goddess?

A Place different from all

Perhaps, it is for a reason. You’ll find the most sweet-spoken and hospitable people you can encounter. The Chaat (a type of street food, literally meaning ‘to lick’) on the street is ever inviting. The transforming sunset in Varanasi over the Ganges is a hypnotic experience. You will see life in a different light once you experience the charm of Banaras tourism.

Moreover, you may know India as a land of festivals, but Varanasi adds its own charm to them. Bharatmilaap follows Dussehra; after Diwali, Dev Deepawali arrives, and Budhwa Mangal, next to Holi. The Varanasi city has always intended to stamp its mark on tradition.

So, why not rejoice in the spirit of Banaras and make an escape to the land of spiritual awakening? Plan your Varanasi trip with a stay in the best place to stay in Varanasi with Moustache. Explore all the hidden gems and dying arts just a short walk away. Skip the hustle and bustle of the busy lanes of the ancient city. Enjoy the tranquility of your Varanasi tour with like-minded seekers and travellers from across the world.

If you got some fables or some interesting facts about the holy city or a story besides the famous ghats in Varanasi. Please, do write to us. And, if you are looking for Varanasi Tour Packages or Varanasi sightseeing trips, look no further.

So this was the complete blog about Varanasi City of Moustache Escapes. Head out to Moustachescapes to make the best of Varanasi tourism. Follow our Social Media and Blog for more offbeat travel tales.

SUSTAINABLE TRAVEL: 10 Ways How you can Travel without Harming our Environment

10 Unusual Travel Facts That Will Blow Your Mind