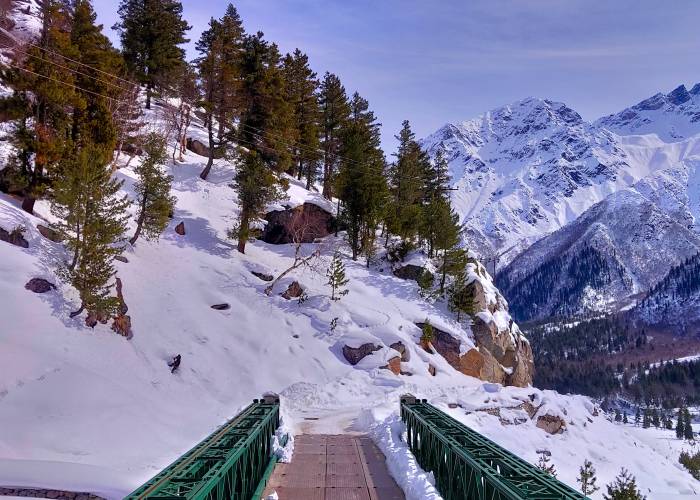 Welcome to the snow-laden province in the northern part of India, Himachal Pradesh. Situated in the Western Himalayas, Himachal Pradesh is among one of the eleven mountain states, characterized by extreme mountain landscapes, majestic peaks and several rivers and clear streams. Here we will explore about Treks in Himachal Pradesh.

The predominated by several mountainous regions, the land of Himachal offers all sorts of high-altitude adventures. From Manali trekking packages to paragliding in Bir Billing Himachal, the Himachal trip has a lot for an avid trekker. So, if you are looking for an escape into the hills of Himachal then you are on the right page with Moustache’s list of all the best treks and tours in Himachal Pradesh.

Witness the beauty of Manali with a bird’s eye. Considered the best trek for beginners, families, and friends, the Lamadugh Trek experience will let you explore the beauty of the entire Valley of God as if you are watching it across the clouds. Just like a bird. Experience a trip to the Beas Kund, or visit the mythological Hadimba temple, from Mahabharat. Explore the vast landscapes and journey through the Solang valley throughout the Lamadigh trek distance, giving you a glimpse of heaven on earth.

A perfect escape from the city of Manali, still being in the Manali. With an astonishing picture of the Deo Tibba range and Dauladhar range, the Lamadugh trek distance covers a trail into the cradle of nature. Perfect for all nature enthusiasts, the Lamadugh trek is a must-go trek with meadows, dense forests along with some of the rarest birds and hidden animals.

Named after the daughter of Lord Indra- Jogini, the Jogini Waterfall trek explores the beauty of this mystical waterfall. Also known as the Jogni falls, the Jogini falls trek distance travels through the forests of Oak and Deodar trees patched with apple orchids. The Jogini Fall trek to Jogini waterfall is like unveiling another secret of Manali’s mystical existence. The Jogini falls trek itinerary, begins with a moderate ascend and eventually ends up turning into a steeper, stony, and muddy ascend. Visit the Vashisht Temple, which is the starting point of the Jogini waterfall trek.

As one of those astonishing treks in Himachal Pradesh, the Hampta Pass Trek covers the unique contrasting beauty of Kullu and Lahaul Valley. Like a half-painted canvas, the view of lush green Kullu valley on one side and barren mountains with the stark landscape of Lahaul on the other is enchanting in itself. The Hampta Pass trekking is followed by a steep with a rocky and vertical climb. With a trail through small forests and colorful fields of wildflower, the trek to the Hampta valley is purely a Himachal trek.

The Hampta Pass trekking takes you to the magnificent moon lake, the Chandratal Lake, situated at an altitude of 14,100 ft, and gives you a glimpse of the magical sunset behind the Hanuman Tibba peak along with the Deo Tibba peak. With all the natural beauties you witness along the way to the Hampta Valley, the trek itinerary trails you to the Manali and Spiti Valley in a single go.

Named after the famous sage Vyas (Beas River in Hindi), the Beas Kund Trek itinerary follows through vast open fields flourished with absolutely greenish meadows. Astounded with glaciers, the trek covers an approx. the distance of 20 Kms with an experience to one of the high altitude Lake, the Beas Kund. Experience camping near the Beas Kund River, right in the middle of the meadows. Sounds amazing? Then listen to this. During winters, the entire valley appears like you are in the Kashmir valleys. And if you are lucky, on pleasant and clear weather, you can glimpse of the Friendship peak, Shitidhar, Ladakhi, and Hanuman Tibba peaks, right from the foothill to the peak.

Escape into the joyful walking through the meadows and forests with the Chanderkhani Pass Trek. Complemented by panoramic views of the Dhauladhar and Pir Panjal ranges, the trail covers a route of oak and pine forests. The Chanderkhani pass trek covers an approx. trekking distance of 17 Km, famous for its meadows, full of steep boulders and narrow paths. With amazing landscapes with blooming wildflower, vast lush green meadows like a massive grassland, the Chanderkhani Pass trek is a complete package of adventures and tranquillity. So it is also one of the best Treks in Himachal Pradesh.

Moderately easy Bhrigu Lake Trek is another trek to one of the serene high altitude lakes. Followed by the tranquil views of the vast and open meadows the Bhrigu Lake Trek itinerary requires a medium level of fitness. And with the journey filled with calming views, the trail has much more to offer. Described as one of the peaceful treks, the Bhrigu Lake Trek is considered to be sacred among Hindus. As it is believed that the Bhrigu Lake is where the Hindu Rishi Bhrigu used to meditate. Thus, the water of the Bhrigu lake is also holy. During winters, the Bhrigu Lake temperature falls to freeze the entire lake forming a glistening thin layer of snow all over it. So it is also one of the best Treks in Himachal Pradesh.
Max. Altitude: 14,100 ft.
Season: April – June, Sept-Nov
Also see Beas Kund Trek, Jogini Waterfall Trek.

As one of the known tourist spots, Kasol is situated at the bank of the Parvati river in the Parvati Valley of Himachal Pradesh. Filled with picturesque views, Moustache Kasol trek packages include a riverside camping experience along with trekking to some of the oldest and purely forest-invested locations across the Parvati valley.

The Kasol Tosh trek encompasses a short trek to chalaal, a small village located deep into the Parvati valley. With some of the oldest traditions still in practice, the Chalaal village is like a canvas filled with a nostalgic time. From the old-style architecture along with its traditional cultural heritage, the place takes you into a different time. Later discover the beauty of Kutla waterfall that lies on the way to Tosh. The fall is that later turns into a lake is among the best hanging spot during the trek to Tosh. Once you arrive at Tosh you can enjoy local as well as Israeli foods in one of the many beautiful cafés around the place.

The Kasol-Tosh-Kheerganga Trek is an extension to the Kasol- Tosh Trek. Where the trail follows the same route as the Kasol Tosh Trek, the trek to Kheerganga is the actual Parvati Valley trek experience. As Kheerganga is known for its sulfur-rich hot spring, the trail encompasses several lush green meadows, waterfalls and a constant ascend and descend onto the Pavati hills. The Kasol-Tosh-Kheerganga Trek trail begins at Barsani will end up astounding you with its natural beauty. Truly a mind and soul-refreshing experience. So it is also one of the best Treks in Himachal Pradesh

The beauty of this trek is the complete Pahadi Lifestyle experience in the deepest part of the Parvati Valley. Located a few kilometers previous to Kasol, The trek to Grahan village delivers you a unique experience of Home Stay with the locals at Grahan village. A perfect moment to live the lifestyle of the native, by living with them. Along with that, relive the cultural and traditional heritage of the place itself with Moustache Home Stay at Grahan during winters. While during the summer, you can enjoy the beauty of the place with Moustache Hostel’s stay.

With Moustache Kasol Package, you can experience a ride into a natural retreat, filled with peacefulness, solemness, and rejuvenation.

A great opportunity to all the first-timers trekkers, the Sar pass Trek offers a balanced experience of Kasol and its tranquility. With a balanced offering of riverside camping at Moustache Kasol stay, the Sar pass trek offers an adventure into the terrain. Explore a variety of flora and fauna as the trail is followed through the lush green forest to a less green and white environment. Enjoy the trail through various small meadows, locally termed as Thatch, and experience camping while stargazing the open night sky.

With only 13 km long, Kheerganga Trek is a beginner’s delight. The Kheerganga route takes you through such paved and warped trails which have been in use for several ages by the local shepherds and village dwellers. Unlike other treks, the Kheerganga Trek trails through natural tracks offer an almost unpredictable number of surprises and wonders. The lush green meadows and stupendous heightened viridescent oak trees bring an unusual sense of relief and satisfaction in the minds of the trekkers and provide an unforgettable view of the limitlessness of the Himalayan mountains. Come, join us on one-of-a-kind treks of Kheerganga which will ride you to a natural retreat of peace, solemness, and rejuvenation. So it is also one of the best Treks in Himachal Pradesh

Located deep into the Himalayas of Himachal Pradesh, Buran Pass Trekking inhabits every possible perk. From large fields of yellow flowers to camping over a cliff on a barren mountain, the trail to Buran pass offers you so way more than any other trek experience. Accompanied by natural beauty and bumpy adventures, the Buran Ghati Trek is filled with exciting challenges. One of the major attractions of the Buran ghati trek is the meadows. Vast and lush green meadows filled with colorful wildflowers, the Buran ghati trek trail follows through the dense forest and astonishing snowcapped mountains along with the view of mesmerizing and tranquil Chandranahan Lake. Truly a journey through paradise.

Well suited for beginners as well as for experienced trekkers, Indrahar Trek delivers you one of the best experiences of witnessing the Himalayan beauty. Beginning from the beautiful hill city of Mcleodganj, the Indrahar pass Trek trails through the Dharamkot Village while offering stunning views of Kangra valley and Dharamshala town below. The trail goes through Triund, famously known for its selective views. Followed by the naturally architected, Lahesh caves. The trail dramatically ascends at the final trek to the pass but ends up offering the majestic view of the Pir Panjal Range of the central Himalayas towards the north and Mani Mahesh Kailash in the east, ending the trek into the lap of nature.

The Triund Trek is one of the famous and the oldest Himalayan trek. Take a break from your hectic lifestyle and indulge yourself in the beauty of blooming pink and red Rhododendrons The Triund Trek with pleasant weather throughout the year, takes you on a fizzy and twisted route through beautiful oak forests and grassy meadows. Marked with the steep trail, the Triund Trek journeys from the ancient local villages and Pahari dhabas whispering antique stories and offering the chance to befriend the locals. Defined as warm-hearted locals and delicious local cuisine to devour. Stargazing under the night sky, with a trail route through the forest with diverse wildlife and exotic bird watch, along with the stunning Dhauladhar Range, and a lot more. The entire Triund Trek is filled with the exotic experience of trekking in the Himachal.

So this is the blog about Treks in Himachal Pradesh of Moustache Escapes. For any queries regarding the Himachal trip, feel free to call us or write to us today or visit our website Moustachescapes.com.
Until then, Keep reading and Keep traveling.

The Jogini Waterfalls in Manali is what Dreams are made of!

Into the Wild – Hidden Villages of Parvati Valley