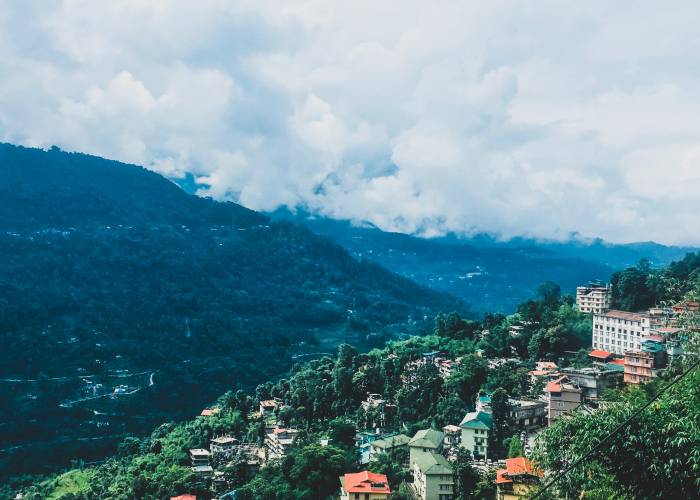 About Top 10 Must-see Places To Visit In Gangtok

The amazing landscapes of Gangtok form a wonderful collage that attracts travellers from all over the world. Snow-capped mountains, tranquil lakes, and appealing valleys — the breath-taking landscapes of gangtok make a wonderful collage that attracts people from all over the world. Gangtok, the vibrant capital of Sikkim, is recognised for its cleanliness, picturesque views, waterfalls, lakes, monasteries, and MG hotels. Here we will explore about the Places To Visit In Gangtok.

Gangtok, a prominent tourist destination in northeast India, is located at a pleasant altitude of 1650 metres. The northeast state of India, Sikkim was recently named the “Most Film Friendly State” in the United States, because of the natural beauty of Gangtok.

Here is a list of some of the top places to see in gangtok.

Tsuk La Khang Monastery is Sikkim’s former Royal dynasty’s imperial ‘gompa.’ This monastery is one of the well known gangtok tourist places. The monastery is part of the Royal Palace complex in gangtok, and is a well-known Buddhist shrine for holy gatherings as well. The Buddhist scripture collections are housed in the two-story edifice. The aroma of juniper incense adds to the tranquilly. Throughout the year, the monastery hosts a variety of events, including Buddhist festivals such as Phang Lhabsol and Losoong (Tibetan New Year). The monks of the monastery may perform the traditional mask dance Chaam during the season, which is celebrated with zeal and excitement. The well-known Black Hat dance, is another popular gangtok tourism attraction which depicts the triumph of virtue over evil powers, and is performed during the New Year’s celebration. So it is one of the best Places To Visit In Gangtok.

The greatest site to view Mount Kanchenjunga and one of the primary locations while cherishing your Gangtok sightseeing. One of the well known gangtok places to visit, the temple dedicated to Lord Hanuman that is maintained by the Indian Army. The gorgeous road leading to the temple, which travels through a narrow and steep slope and passes past lush green trees, is one of the must-see views in Gangtok. The temple area is orderly and clean, and the temple’s moderate music contributes to the overall fascinating temple complex’s wonderful sentiments. There is also a designated overlook with seating arrangements from which you can see Mount Kanchenjunga sitting in the middle of nature. There is no entry price, and parking is also free.

Seven Sisters Waterfall, as the name implies, is made up of seven individual waterfalls that cascade down the side of a large, steep cliff. The Seven Sisters Waterfall is among the must see places to visit in Gangtok, which is located on the way to north Sikkim, 32 kilometres from gangtok. This waterfall is particularly lovely when it rains, attracting a large number of visitors. Gangtok tourism is completed without a visit to this place, which is rich in natural beauty. Seven Sisters Waterfall is a famous gangtok places to visit where you can spend time with your family and friends while also taking a lot of photos. The Sikkim Tourism and Civil Aviation Department has set up a café and a shelter here to assist tourists. Visitors can take images of this beautiful waterfall from here.

Nathula Pass is one of Gangtok’s most prominent tourist attractions. Around 50 kilometres from Gangtok city, travelling through winding roads, beautiful scenery, and tall peaks, the pattern gradually changes as you gain altitude. Nathula Pass, perched at an altitude of 4310 metres, will steal your breath away with its breathtaking Himalayan views. It is a well-managed area under the control of the Indian Army, with stringent standards. With a proper permit, this is the closest point to China that Indian citizens can visit. Cameras and cell phones are not permitted, and photographing is strictly prohibited. The Nathula Pass is closed to travellers on Mondays and Tuesdays, and visitors can only visit Changu Lake and Baba Mandir. To visit Changu Lake, Baba Mandir, or Nathula Pass, you’ll need a permit.

The second major attraction of places to visit in Gangtok is Lake Tsomgo or Changu Lake, a glacial lake perched at an altitude of 3753 meters. It is always covered by Nathula Pass and Baba Mandir. Located on the road to Nathula Pass, which is approximately 15 kilometres from Changu Lake. Because photography is prohibited at Nathula Pass, Changu Lake is the ideal location for capturing the highlights of your Nathula adventure. The lake is well-kept and nestled among the steep Himalayan ranges making it one of the remote gangtok places to visit. The lake is merely a viewing and no activity inside the lake is permitted. There is a Kupup lake nearby where you can have a boat trip.

The Shingba Rhododendron Sanctuary is famed for its stunning rhododendrons, which are found in the beautiful Yumthang Valley in North Sikkim. The park covers 43 square kilometres and is home to 40 different rhododendron species. The sanctuary is situated at an elevation of 3,048 to 4,575 metres with numerous species of trees including Saxifrages, Aconites, Potentillas, Aconites, and Gentias. The azaleas blossom to their maximum capacity and turn the Shingba Rhododendron Sanctuary into a riot of hues from April to July , making it the finest time to visit the place. The Yumthang Chhu, which runs through the sanctuary, lends it a lovely appearance and is one of the must see gangtok tourist places.

If you are looking for thrilling gangtok tourism to high altitude trekking and other similar activities, then don’t forget to  make your stop at Mt Katao, while visiting gangtok tourist places. Mt Katao, which is covered in natural vegetation such as poppy, rhododendron, and primula, is a breathtaking sight to see. The bizarre mountain is located in northern Sikkim, 144 kilometres from Gangtok and 28 kilometres from Lachung. During the winter season, the passersby are treated to a spectacular vista. Mt. Katao is ideal for all kinds of high-altitude adventure activities because it is blanketed in snow throughout the year. It mostly consisted of a variety of mountaineering sports such as skiing, snow tubing, snowboarding, and other similar sports. Nearby, there is a zero point that offers some excellent views. So it is also one of the best Places To Visit In Gangtok.

8. Cable Ride – Gangtok in a nutshell

Do you want to have a bird’s eye perspective of Gangtok City? A tourist attraction in Gangtok, this 800-meter-long cable car runs through the centre of the city, giving you a bird’s eye glimpse of the beautiful Gangtok. The ropeway connects two areas of gangtok, lower gangtok and upper gangtok, albeit you cannot exit and go around on the other side. It is merely a to-and-fro service for scenic purposes. It’s worth visiting it for once. The views of the city from the cable car, which is surrounded by forested hills, are breathtaking, and the journey itself is thrilling.

Tashi viewpoint, located around 7-8 kilometres from Gangtok, is one of the best spots to visit in the city. Tashi viewpoint provides an unobstructed view of Mount Kanchenjunga, which is best seen at sunrise and sunset. Unlike any other popular places to visit in gangtok, the Tashi viewpoint is normally tranquil and one can spend a good period of time admiring the spectacular views of Mount Kanchenjunga and the metropolitan scenery. There are cafes, restaurants, and food vendors to keep you going, as well as souvenir shops.

Lal Bazaar, the market where local farmers from around Gangtok converge to sell their wares, captures the actual brilliant colour of Sikkim. The Lal Bazaar in Gangtok, especially on Sundays, is a riot of colour when diverse ethnic groups from various areas congregate to haggle, bargain, talk, or just sell their items. Most of the hotels in Gangtok are within walking distance of Lal Bazaar, which is located immediately below the M.G marg. The Old Market has been transformed into the Khangchendzonga Shopping Plaza, a sophisticated shopping complex. The market was first erected in 1956 and was named after J. Lal, a Chogyal Dewan.

There is enough fodder for visitors and adventure enthusiasts to organise an outstanding journey to this north-eastern beauty with this ready reckoner of excellent things to do in Gangtok!

So, are you planning to take gangtok tourism?

So this was the complete blog about Places To Visit In Gangtok of Moustache Escapes. Moustache Tour Packages to the Northeast offers interesting deals and savings on trips to Gangtok. You will have the fun of your life here, and the abundance of activities that Gangtok has to offer will not disappoint you.

For more of such travel trivia, keep following our blog @Moustachescapes.com

Things to do in and around Sikkim

Top 10 ‘Must See’ Places To Visit in Sikkim

Searching for Cafe in Sikkim? Explore 10 Best Cafés In Sikkim You Must Try