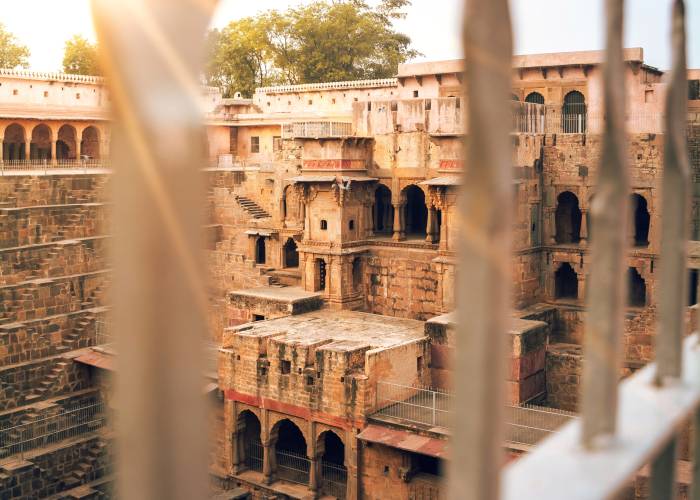 The Abha Nagri, when literally translated means the town of brightness, though through mispronunciations and time, the nomenclature by Raja Chand of Abha Nagri got adjusted to be called Abhaneri as it is now famous as. Home to one of the deepest stepwells in the world today, the Chand Baori stepwell of Abhaneri is a spectacular example of great artistry and speckless architecture present in the ancient eras. So here we will explore more about chand baori abhaneri.

Height equivalent to that of a 13-storey building, Chand Baori was constructed in the medieval times in order to get rid of the shortages of water in the region by building a deep stepwell that could contain enough water from the rains so that the population could rely on it for as long as a year. The stepwell has stairs on 3 sides so that it is an easily accessible well for the villagers. The total steps present in the stepwell are a whopping figure of 3500, which in itself is a miraculous fact. The architecture is that of Gupta period and it is quite a sight to see the perfection with which it has been executed.

A summer retreat for the royals of the time, the stepwell, not only catered to the water needs of the population during parched months of summer but even helped keeping the surroundings cool and refreshing even when the sun showed no mercy to the inhabitants. A courtyard around the stepwell has idols and carvings from the 10th century that even today are greatly appreciated.

Thousands of tourists today, especially go to this village to see the Chand Baori, though it is not the only thing they seek for. The Harshad Mata Temple right opposite to this step well is another site that draws attention towards it. Locals believe that the goddess is the harbinger of good fortune and wisdom for them and worship her with serene patience and purity.

It is unfortunate though, that the complex of the temple that we see today in ruins was victimised during invasions from the Islamic invaders who left the entire village in a ruin and destroyed most parts of the temple.

Situated in Eastern Rajasthan, Abhaneri is 90 Kms east of Jaipur on the Jaipur-Agra highway and is nearest to the nearby town of Sikandara. Hop on a bus from Jaipur to Sikandara and just a ride of an hour and a half will drop you at Sikandara, costing a mere 20 bucks. Get yourself a cab or jeep till Abhaneri which is about 10 Kms from this town, this may cost you about 250 bucks for a round trip. So, if you too are planning for the golden triangle voyage, do not ever forget to visit this town on the way.

Lovers of art, take note – This destination is where you should head next!! – Nathdwara Temple

Tips to Remember while Backpacking with Children