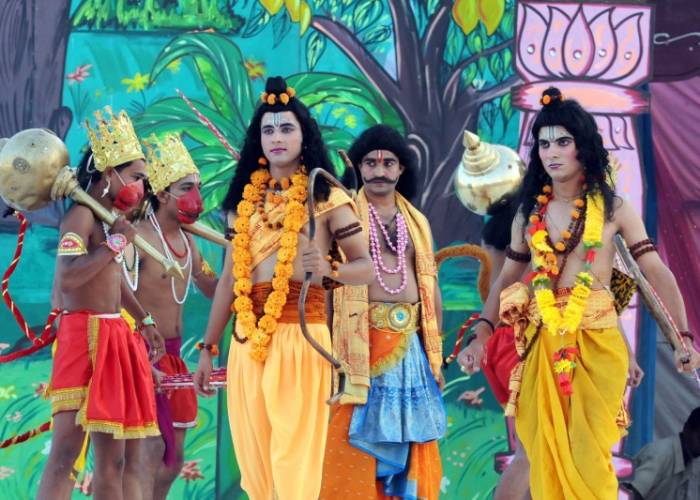 Driven from the patient currents of Ganges, the town at peace, the city of lights and the destination of life and death is at its peak zeal during this time of the year, it is cool, it’s calm and it’s surreal. The age ago legend of Ramayana is one of the oldest mythics in the world, and this is where it was written; narrated and written by the legendary sage Valmiki in an indefinite moment of the past, that still remains uncertain for most of us, this city probably has the biggest connection with the mighty Lord Rama.

It might be possible because of this relationship with the town that Lord Rama is worshipped with utter serenity and sincerity by thousands of devotees in here, throughout the year. Especially during the months preceding Diwali, a properly dictioned play is performed in Varanasi- and that is what we know as Ramleela, which, when literally translated into English means “the spectacles of Rama”.

It’s surely a glorious event and a lifetime experience, especially for all those who have no idea what the enactment is and how big a deal it is for millions here in a country of traditions and folklore. The practice of playing a series of episode in real time, was the initiative of the Maharaja of Benaras, as the city was called back then in the nineteenth century and ever since has been carried out through the pages of history, and of course the script taken from Ramcharitmanas of the legendary poet Tulsidas has played a pivotal role in the successful implementation being carried out this way, without the originality of the art form being lost away in the air of immaturity or washed away by the tides of time.

The Ramnagar Ram Leela in Varanasi is an affair of immense vibrance and has a very rich flavor of history and artistry, as such it is as real as it gets. Millions who come to this town during these months consider themselves fortunate for having witnessed one of the finest experiences of a play being portrayed in a way like probably no other.

While sages and tourists alike come together to see this brilliant piece of art, the town showcases its true spirit and shows you the India that you have always aspired to see. Kashi Naresh, who is a descendant of the royal family of Benaras, (well of course Kashi is the town’s name and Naresh in Sanskrit means a king), rides up to the location on his elephant even today while greeting all his well-wishers and followers on the go.

A melting pot of cultures, soaks in the atmosphere splendid spectacles and not only does make you aware of the legend of Rama and Sita, but even proves to be a great evidence of the beautiful literature that India has always had. While you walk around the chaos-filled streets of Varanasi, it is quite obvious to hear all that you don’t want to, still, seekers of peace must find it here, wishing for silence could be making a futile wish though. Shop around cool Indian spiritual stuff while going on your expedition across this town in the evening.

Post the episode of Ramleela, which can sometimes last overnight, one always can stroll past the ghats of the Ganges in the night, finding one’s own selves in moments of awe while witnessing the holy river shimmering with thousands of candles late after the sun sets down, the sessions of Ram Leela begin from Dussehra festival and continue until the arrival of Diwali. If by now, you are not convinced what you are up for is a heavenly experience, pack the bags now and go to see for yourself.

5 Best Places To Celebrate Holi In India In 2023