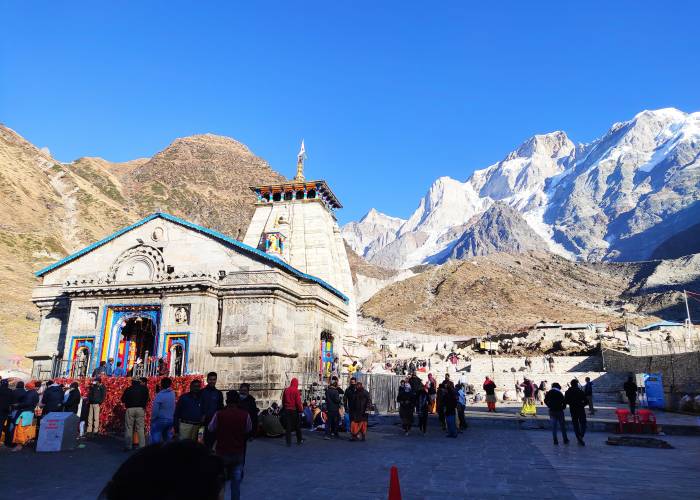 About Kedarnath and The Origin of Panch Kedar

Uttarakhand is referred to as ‘Land of the Gods’ as it has been a place of worship and pilgrimage from time immemorial. Lord Shiva is the most revered deity in Uttarakhand and one can find many temples and shrines dedicated to him. Many local deities of Uttarakhand allude to Lord Shiva in some form or other. So here will explore about Panch Kedar.

One of the prominent sites of Lord Shiva in Uttrakhand is Kedarnath. The Kēdārnāth Mandir (Kedarnath Temple) is one of the holiest Hindu temples dedicated to the god Shiva. Located on the Garhwal Himalayan range near the Mandakini river in Kedarnath, Uttarakhand in India, it is one of the Char Dham stops with over 1200 years in age.

Did you know that Kedarnath is one of the Panch Kedar?

The Garhwal region is also called the Kedar-Khanda after Kedar — the local name for Lord Shiva. The region abounds in emblems and aniconic forms of the Shaiva sect of Lord Shiva, much more than the Vaishnava sect. The western part of this region in particular, which constitutes half of Chamoli district being known as Kedar-Kshetra or Kedar mandala, encompasses in its ambit all the five temples constituting the Panch Kedar.

What is Panch Kedar?

Panch Kedar is a group of five Mahadev Temples in the Garhwal Himalayas. Five Hindu temples or holy places of the Shivaite sect dedicated to god Shiva. They are the subject of many legends that directly link their creation to Pandavas, the heroes of the Hindu epic Mahabharata.

The five temples designated in the strict pecking order to be followed for pilgrimage for worship are the Kedarnath Temple at an altitude of 3,583 m (11,755 ft), the Tungnath Temple (3,680 m or 12,070 ft), the Rudranath Temple (3,559 m or 11,677 ft), the Madhyamaheshwar Temple or Madmaheshwar (3,490 m or 11,450 ft) and the Kalpeshwar Temple (2,200 m or 7,200 ft). The Kedarnath is the main temple, which is part of four Chota Char Dhams (literally ‘the small four abodes/seats’) or pilgrimage centers of the Garhwal Himalayas. Whereas kedarnath and Badrinath along with Yamunotri and Gangotri completes the Char Dham. Kedarnath is also one of the twelve Jyotirlingas.

The Legend of Panch Kedar

Panch Kedar has an interesting legend. According to the Hindu legends, after the Kurukshetra War, the Pandava brothers, came here in the penance of Shiva on the advice of the sage Vyasa, seeking forgiveness for assassinating their kin during Mahabharata. However, Shiva hid as a bull since he did not want to forgive them. When discovered by Pandavas, he tried to disappear by sinking himself into the ground. Bhima, the strongest of them all grabbed his tail, to pull him back to the surface. But the tug of war resulted in the partition of the bull into five pieces, which scattered to different geographical directions. The whole incident of hide and seek took place at Guptkashi, from where its name came from.

Later, all those five pieces resurfaced, but this time it was in a human form. It was Lord Shiva himself. Convinced, he showed up and forgave them. It was then, the first temple was built by the Pandavas at Kedarnath (one of the 12 Jyotirlingas). Later the limbs of Lord Shiva appeared at four other locations.

Which are these five Mahadev Temples?

After forgiving Pandavas for their sins, Lord Shiva Resurfaced at four other locations. His hump resurfaced at Kedarnath, which is one of the 12 Jyotirlingas. His Face resurfaced at Rudranath, which is a Natural Rock Temple. Whereas, the Arms resurfaced at Tungnath which is the Highest Shiva temple in the world. With tungnath height of 12,070 ft from the sea level, the average tungnath temp hovers around 16 degrees Celsius. And then, his Naval (torso) emerged at Madhyamaheshwar. Last, his Hair emerged at Kalpeshwar which lies between Rudranath and Helong, a motor head on Badrinath route.

Collectively, these five places came to be known as the five Kedaras (Panch Kedar); the head of the bull appeared at the location of Pashupatinath. These temples of Panch Kedar have been and are seats of Tapasyas for sages from time immemorial. It is believed that even today the area abounds with siddhas and sadhaks.

What is the route of the Panch Kedar Parikrama?

The trek to all these temples takes 15-16 days. None of these temples are connected to a motorable road, and the way to these temples takes one through some of the most beautiful parts of Garhwal Himalayas. It is not a picnic trek, but a great event to bring you closer to yourself as also to the Divine. Not to mention the entire journey you will be traversing at the foot of majestic mountains surrounded by magnificent views.

The Panch Kedar temples are accessible only from the nearest road heads but in different directions, lengths and scale of difficulty (ruggedness, steepness and snow cover). The trek routes located in the Garhwal region provide a dazzling and enchanting display of the high snow peaks of Nanda Devi (7,817 m or 25,646 ft), Trishul (7,120 m or 23,360 ft) and Chaukhamba (7,138 m or 23,419 ft). Garhwal region is where the most worshipped Ganga River and its many tributaries originate adding to the reverence of the Panch Kedar temples.

The total trek length to cover all the five temples of Panch Kedar is about 170 km (110 mi) (including road travel up to Gaurikund), involving 16 days of effort. The trek starts from Gauri Kund, which has views of the Himalayan range of hills. The trekking is undertaken during two seasons; three months during summer and two months after the monsoon season, as during the rest of the period, except Kalpeshwar, the other four Panch Kedar temples are inaccessible due to snow cover.

After the kedarnath trips, road travel to Guptkashi and further to Jagasu covers a distance of 30 km (19 mi). From Jagasu, the trek to Madhaymaheshwar temple via Gaundhar is over a distance of24 km (15 mi). This trek provides views of the Chaukhamba, the Kedarnath and the Neelkanth peaks.

Returning from Madhyamaheshwar the road drive to Chopta via Jagasu is 45 km (28 mi). From Chopta, the trek is to the Tungnath temple over a distance of about 4 km (2.5 mi). After the Tungnath trek covering an astonishing height of tungnath temple, drive along the road up to Mandal (known Cherrapunji of Garhwal due to heavy rainfall) is for a distance of8 km (5.0 mi). From Mandal, the trek to Rudranath temple is 20 km (12 mi).

After visiting Rudranath temple the return journey is to Mandal and the drive down by road to Helang. From Helang, the trek to Kalpeshwar temple is for 11 km (6.8 mi) via Urgam village and is considered strenuous due to the steepness of the route. After completing the pilgrimage trek of Kalpeswar temple, the last of the Panch Kedar temples, the return road drive from Helong to Rishikesh to Pipalkothi is a distance of 233 km (145 mi).

Panch Kedar during winters is closed because of the snow cover. The idol of Lord Shiva from Kedarnath is shifted to Omkareshwar temple at Ukhimath and is worshipped there for the other 6 months. The representational idol of tungnath mahadev is worshipped at Mukkumath. The symbolic image of Rudranath is brought at Gopeshwar and the symbolic idol of Madhyamaheshwar shivling is honored at Ukhimath. It is the only Kalpeshwar that is open throughout the year.

Although if you are an avid trekker you can go during the winters but you gotta be well equipped with food and good trekking gear. Winters in the Himalayas are absolutely ravishing, dolled up with vegetation and décor which is absolutely incredible.

Tips to Travel at The Panch Kedar

When Travelling to the Panch Kedar, make sure you are physically fit as this journey requires you to be in the optimum state of health.

Pack the essential things you need in Panch Kedar such as power banks, important medicines, creams, energy bars, heavy to light woolen clothes depending on the travel month you choose.

The Panch Kedar is open for only 6 months except Rudranath which is accessible throughout the year.

The Panch Kedar is a long journey to be covered therefore plan your journey early in the mornings to visit all the Panch Kedar at an appropriate time.

With this we wish the divine may shower you with all the divinity. Before travelling to the Panch Kedar make sure you thoroughly go through this Travel Guide of Panch Kedar.

A beautiful journey has come to an end, but the experience of the kedarnath tour will stay with you for many lifetimes.

And, if you are travelling at Kedarnath Trek then you can also visit Kedarkantha Trek, valley of flowers national park, chopta chandrashila trek. Because these are one of the nearby places of Kedarnath. It will surely make your visit more memorable.

Find out more about Moustache’s Kedarnath Yatra Packages. Also, take a look at our exciting tours and trip packages at an extreme budget friendly price range. Book your tour or create your custom travel itinerary only with Moustache escapes.

So this was the complete blog about Panch Kedar of Moustache Escapes. For more of such travel facts, continue reading our blog.

Also, we love to get social interactions. That’s why stay connected for our latest travel story/blog and related travel deals, posted on our Instagram page and share your feedback!

Check out our kedarnath tours package to the highest Shiva temple in the world.

Why is Rishikesh, a Paradise for Adventure Lovers?

Some cure, some kill, some bloom – An aromatic Valley of Flowers guide