From Craft bazaars in Delhi heritage streets to stories by royalties over high tea. From the heart stealing pink monuments to sprawling royal palaces and heritage courtyard. Live out your Dreams of South Asia with Golden Triangle India Tour. A road trip across a myriad of landscapes witnessing India’s rich and vibrant culture.

Sign up to Moustache India Golden Triangle tour. Your golden ticket to explore the best of India with Customizable and Luxury Golden Triangle Tour India Packages. Plan your perfect Indian holidays with our collection of personalized tour packages. The Golden Triangle in India travel circuit includes the cities of Delhi, Agra, and Jaipur, which are approximately 250 kilometers apart and form a triangle on the Indian map. Discover India’s illustrious history and culture, marvel at the UNESCO World Heritage Sites, and savor the allure of India. Get ready for a lifetime trip to India with Golden Triangle India Tour Package.

If you are visiting India for the first time, the India Golden Triangle Tour – covering Delhi, Agra, and Jaipur is the best option. This is the most popular tourist circuit in India. The incredible Golden Triangle India Tour includes three famous Indian cities with grandeur, glory, and history: Delhi, Agra, and Jaipur. The schedule for the Golden Triangle Tour in India begins in Delhi, the capital of India. And, as the Indians call it, the heart of India. The seamless coexistence of the bygone past and the fast-paced present day is the icing on the cake. Because of constant change of rulers over the centuries, the “city of cities” has a diverse range of traditions, monuments, and culture. With its magnificent structures and regal lifestyle, Agra, the Taj Mahal’s birthplace, evokes the Mughal era. A number of spectacular monuments in Rajasthan’s “pink city,” Jaipur, bear witness to the state’s royal Rajputs’ illustrious past. These cities under our India Golden Triangle Tour Itinerary, have all witnessed significant historical events in India. They left behind architectural marvels that serve as reminders of their wealth and splendor. The vibrant culture, delectable foods, bustling markets, heritage walks, opulent hotels, and more all contribute to unforgettable encounters. Making it the best Golden Triangle Tour India with Moustache Escapes. 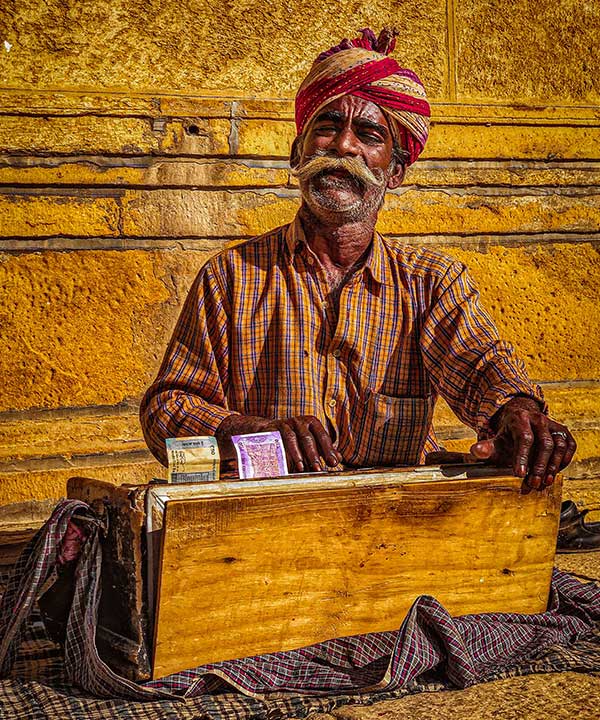 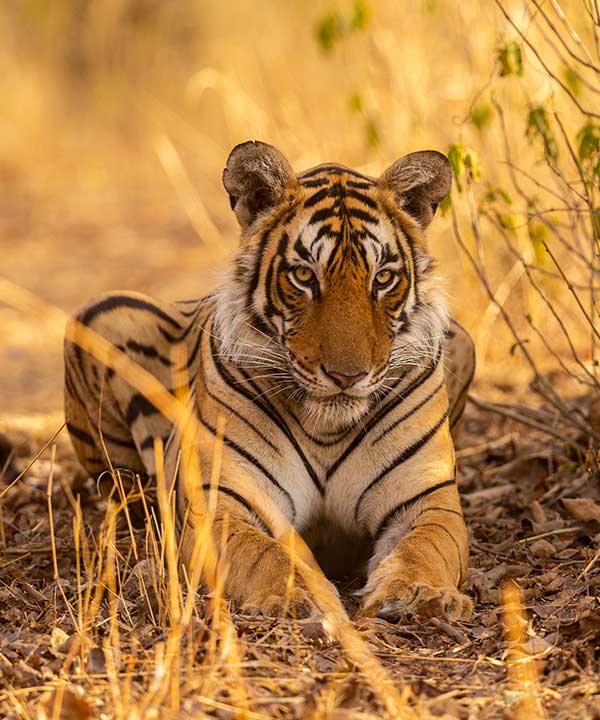 Holidays in India are nothing short of a dream come true. Explore our diverse travel destinations, or simply choose your preferred vacation style with our custom curated Golden Triangle of India packages. We also offer city breaks, staycations, destination weddings, and private charters in select locations across India.

Besides, why limit yourself to just three locations in a land of million beauties? Check out our range of Golden Triangle India Tour Package. We can assure you that it is not about history and heritage. There’s so much more to it. There is plenty of shopping and entertainment in Delhi. Even if you’re planning a golden triangle tour with children, you’ll have plenty of options. Museums, planetariums, gardens, temples, monuments, and amusement parks will keep your children entertained.

However, if you want to see the best of India, you should book golden triangle tours with extensions.

Our collection of golden triangle tour packages includes itineraries to Rishikesh Yoga wellness retreat, Kerala Ayurvedic Detour, meet the Big Cats of Central India with Wildlife Expedition, spiritual trip to the temples of Varanasi, Khajuraho, Orchha, the UNESCO site of Agra by Yamuna River, and other must-see destinations in India. The best thing about our golden triangle packages is that each tour is customizable and can be tailored to your specific needs.

To plan your trip, browse our collection of Golden Triangle Tour of India. Or simply fill out the form and let us know what you need so that we can provide you with a customized itinerary.

Explore the ultimate treasures of unforgettable experiences that await you here. As soon as you set foot in India, you will fall in love. Allow us to assist you in creating a memorable event by browsing our sea of ideas and selecting your pearl. 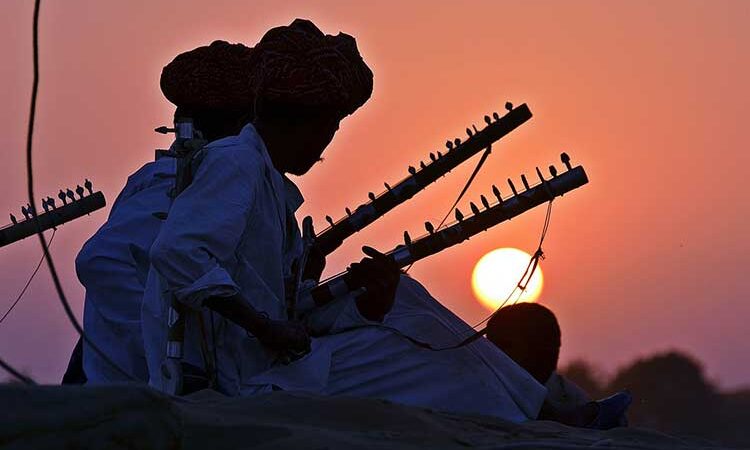 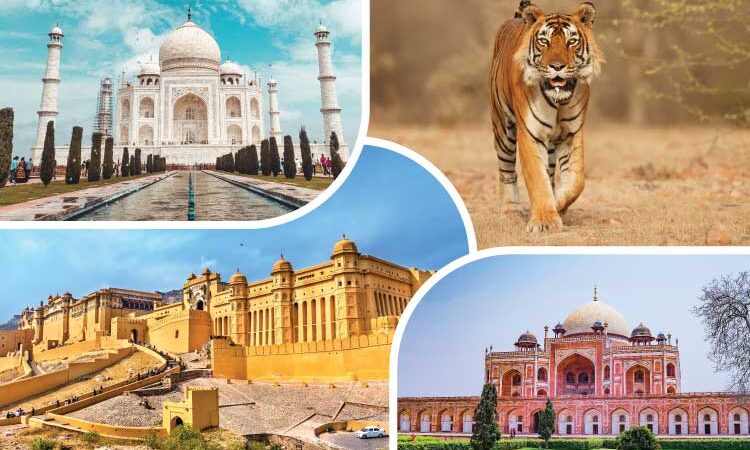 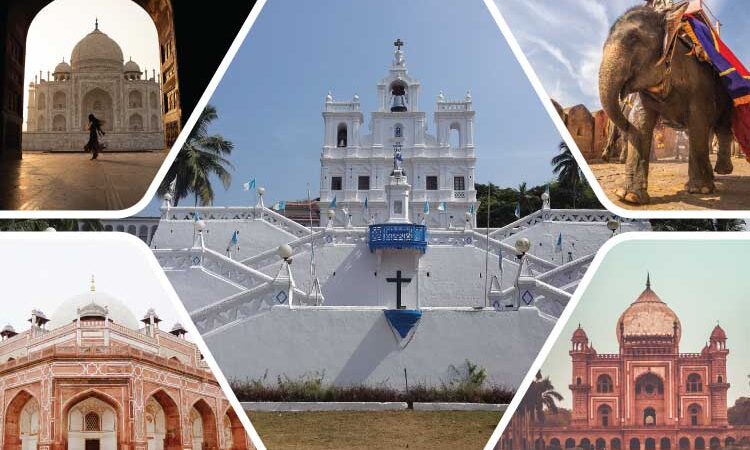 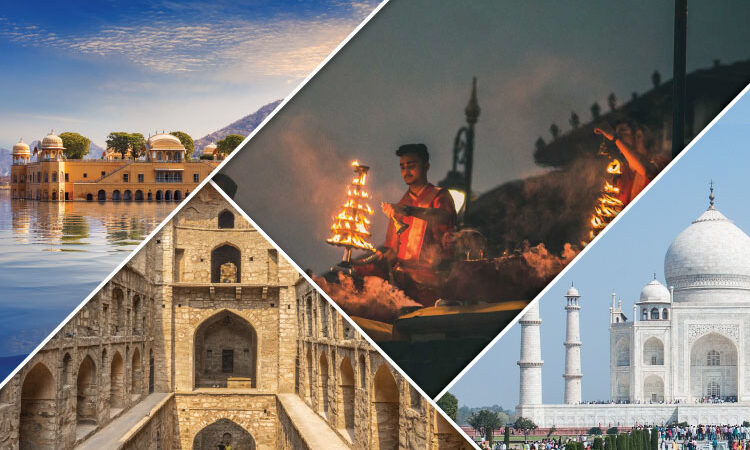 Discover India through Moustache Escapes Best Golden Triangle in India packages. Go wild with the crowd, celebrating life at its fullest. From shopping shenanigans to lip-smacking cuisines, dizzying levels of intensity, to countless and deliriously good new places to eat, drink and sleep. India is the hub of Experiential Tourism. You just name it and we’ll customize your Golden Triangle India Tour.

Besides, the golden triangle route India makes way through mighty mountains, the sapphire seas and plenty of other water bodies. An enchanting beauty that is always welcoming. Experience India Golden Triangle Tour & Travel, the picture-perfect destination that offers superb prospects for new-age tourism. Get on board to meet the vast variety of wildlife and the defying deserts – India has everything to give you a dose of thrill and feel!

What is Golden Triangle India?

The Golden Triangle of India is a circuit tour that connects the nation’s capital New Delhi with Agra, and Jaipur. The Golden Triangle is named after the triangular shape formed by the locations of Delhi, Uttar Pradesh, and Rajasthan on a map.

How long is the India golden triangle tour Itinerary?

The Indian golden triangle on the road can be covered in at least 4 nights and 5 days. It will connect the primal cities of North India. This includes Delhi, the cornerstones of the golden triangle in the country's north. Then Agra, a medieval city on the banks of Yamuna River which was founded by Sultan Sikandar Lodi in 1956. And, lastly Jaipur, India’s first planned city that was founded in 1727 by Maharaja Sawai Jai Singh II.

When is the best time to visit India Golden Triangle?

Holidays to India need some careful planning. One of the first things to consider is the best time to visit India’s Golden Triangle. We advise that any time from October to April will be the most pleasant. However, if you’re visiting during Diwali– you can join in celebrations for the festival of lights.

Is the Golden Triangle India Tour worth visiting?

The Golden Triangle of India is one of the famous tourist circuits in Northern India. The trip offers a perfect introduction to India's rich history, culture, and customs, especially for first-time visitors. The Golden Triangle will take you across the most visited cities of India – Delhi, Agra, and Jaipur.

The Golden Triangle of India refers to three prestigious points in Northern India: New Delhi, Agra, and Jaipur, which form a triangle on a map. However, Moustache Escapes allows you to customize your India Tour itinerary.

How to book best golden triangle tour package in India?

Simply book your Golden Triangle India Tour with Moustache Escapes. We offer customizable destinations and days that can be curated as per your ease. Choose from Yoga capital of Rishikesh or the God’s own Country Kerala, or visit the world’s oldest city Varanasi. You also add new and exciting offbeat activities in the itinerary. Or, choose to skip as per you budget and pre-planned trip to India.

How many golden triangles are there in India?

The term "India's Golden Triangle" refers to three prestigious points in Northern India: New Delhi, Agra, and Jaipur, which form a triangle on a map. Flying into New Delhi, the capital, then to Agra, Uttar Pradesh, and then to Jaipur, Rajasthan.

What is the best month to go to India?

Winter is the best time to visit India, lasting from December to early March. From April to September, the entire country becomes extremely hot, and most regions experience the summer monsoon in at least June, July, August, and September. 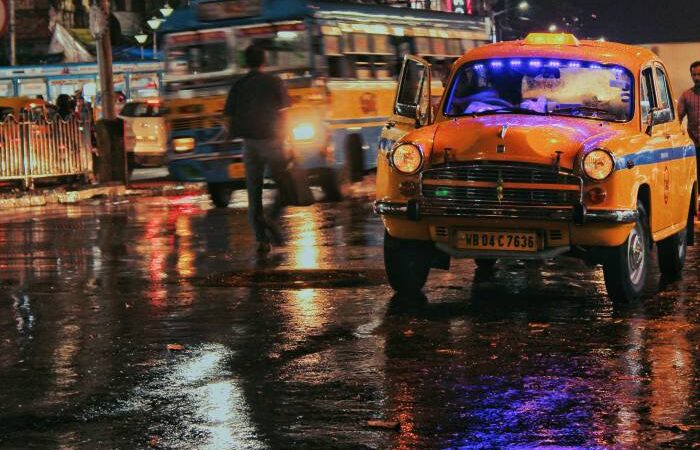 Think City-escaping is no fun? Try Staycation in Kolkata With Moustache Escapes

A staycation in Kolkata is changing the commoner’s perspective of not-so-fun city escaping. Entitled as the ‘City of Joy’, there’s so much to explore right… 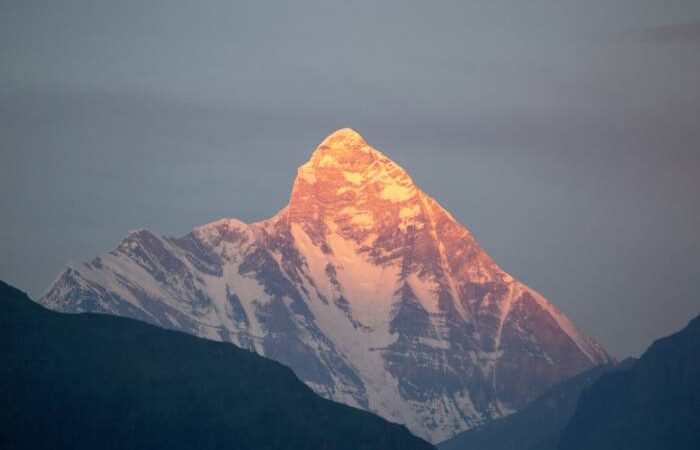 After a heartbreaking glacial flood in the Chamoli district, which is popularly known as the Nanda Devi base camp for many stimulating Himalayan treks, many… Crashing in Jaipur with a Cash Crunch? Things to do in Jaipur in a short Budget!!

Arriving early for or flying late from #LitFest2019 Jaipur? Have no idea about things to do in Jaipur on a short budget? We’ve got you…