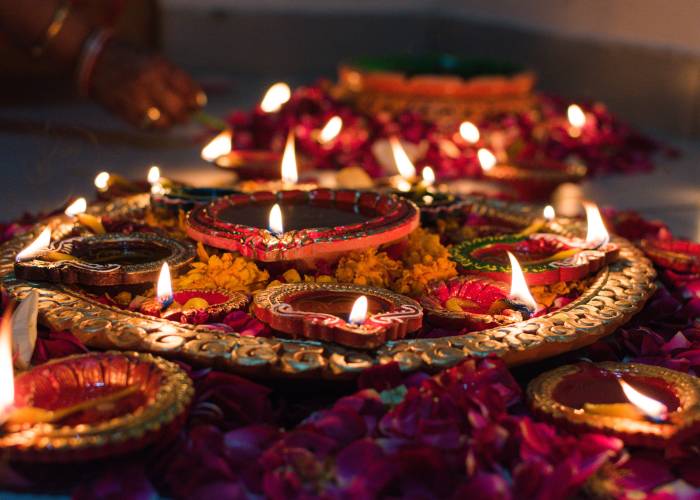 Ever wondered how to celebrate Diwali while hanging out with your Indian peers? If you do, then this is the right page to learn what it’s like to experience how Indians celebrate Traditional Diwali in true Desi style?

Hit the tarmac and you will be greeted by intense sounds, smells, and a sensory experience like never before. Welcome! You have just arrived in Incredible India, where it is believed that “Guest is God”.

Wondering when to visit India?

Forget about the sultry summers and rainy monsoons for the best places to visit in India in August. It is at this time, one can experience the peak beauty of India during the most awaited festival of Diwali similar to Christmas back home. The whole of India is in joy, with festivities in the air and the pleasant autumn sun on your face. October and November are the best months to start your vibrant and festive journey through India.

BTW, if you are in India there are few places you must not miss when visiting during the festival of lights:

Delhi is a city that literally and figuratively lies in the heart of India. The word Delhi itself means “Gateway”. So staying true to its name, Delhi welcomes you to begin your grand Indian adventure from India’s Heartland.

On your first day in Delhi, you’ll notice the amalgamation of a rising modern nation in harmony with traditions. While Delhi can prove to be an overwhelming experience for some. The big-heart generosity and smiling faces in the crowded lanes of Delhi indicate something else. And that is especially true during the month-long celebrations leading to Traditional Diwali.

The markets are decked with discounted goodies attracting the shoppers to relish in the festive atmosphere. While the country waits feverishly during the festive season, Delhi celebrates it with an elevated fervor.

On this trip, you will experience the ancient UNESCO heritage sites like:

Face of Delhi tourism, this brick Minar is one of the architectural and city-planning marvels of the Delhi Sultanate. The monument is a gleaming beacon of beauty during the festive months before Diwali.

As the name suggests, the magnificent fort sitting in the heart of Delhi is entirely made out of red marble. The historic fort is famous for hosting huge Diwali celebrations since the Mughal rule. Make your way to Red Fort to witness the stimulating Traditional Diwali special light & sound show.

The architectural marvel is dedicated to the Mughal king of Humanyu. Experience the rustic beauty of perfect symmetry while walking around the ample garden area.

Apart from these sights, Delhi is a paradise full of ancient and modern wonders, famous Delhi food, and bustling markets. This becomes especially true during the festival months of October and November. Experience the numerous local fairs full of handicrafts, heritage art, and flavourful street food at Delhi Haat, Chandni Chowk.

End your Delhi trip exploring the centre of power like the President House, India Gate, and Raisina Hill. You can find embassies of most nations around the central Delhi area. Explore Delhi’s urban corners while celebrating the country’s legacy and paying your reverence to Mahatma Gandhi and the Indian freedom fighters at Raj Ghat and India Gate.

After an overloaded sensory experience and witnessing the rise of a modern nation in harmony with traditions. It’s time to head towards Agra, a city of poets, intellectuals, and the world-famous grand symbol of Love.

From Agra with Love

The second of the iconic Golden Triangle vertices holds the most awe in the Golden Triangle of India. This probably is what drew you to India in the first place. The Taj Mahal, one of the 7 Wonders of the World, is as stunning in its beauty as it is significant in India’s history.

On your way to Agra from Delhi make a pit stop at the Lal Quila, also known as the Agra Fort. The former capital and the centre of power for the Mughals, Agra Fort has a peculiar story. Just like the Taj Mahal is represented as a symbol of love, Agra Fort stands as a symbol of complications in relationships. The Agra Fort, grand in size and history, was a place of house arrest for the emperor Shah-Jahan. It is said that the son of the emperor, Aurangzeb placed Shah-Jahan in Agra Fort for emptying the royal treasury in pursuit of constructing The Taj Mahal.

Talking of the Taj Mahal, the architectural symbol of love that attract millions from around the globe. This world wonder truly deserves to be on every travel bucket list. You can try and capture its beauty through a lens, up close, across the Yamuna river, or far away from the lit rooftop cafes with the Taj View.

Though Agra is also one of the best places to visit in July in India during the rainy season, imagine the moonlit white marble gleaming in all its glory, with a perfect reflection of its minarets on the tranquil Yamuna river. If you think it can’t get any better. Suddenly the silence is broken by a large firecracker bursting against the backdrop of the Taj Mahal. That’s when you know, you just had a moment you just can’t get back!

We apologize for getting lost and wondering about the Taj Mahal. But, such is its beauty, which is even more exaggerated during Traditional Diwali. After soaking in the beauty of the Taj Mahal, if you thought that was the highlight of your trip. With a surprise in store for you, we head towards Jaipur for a truly authentic Diwali experience.

After, witnessing the modern and historical Delhi, poetic and charming Agra. It is time to experience the royalty and regality of Jaipur at the most-awaited vertice of the Golden Triangle tour.

Moreover in Jaipur, you will be celebrating a grand Traditional Diwali in Rajasthan and experiencing royal forts like Nahargarh, an opulent royal elephant ride at Amber Fort. Witness the Diwali vibes most visible on the facade of the Albert Hall Museum and the Hawa Mahal and so much more.

You’ll be pleased to know that Jaipur has a long history of celebrating Diwali over five days of festivities. What starts as Dhanteras on Day 1, where people buy Gold and Silver for auspiciousness. You can experience the best diwali trip in India at the shiny affair at the Johari Bazaar (Jeweler’s Market) which is also called The Strip, as the market is lit just like The Strip in fabulous Las Vegas.

The festivities come to a quaint end on the Bhai Dooj festival on Day 5, with Roop Chaudas, Diwali, and Goverdhan Puja in between. All these festivals are accompanied by firecrackers, lit-up building facades with LEDs, and earthen lamps.

Most importantly, you can witness almost everybody indulging in mouth-watering sweets, snacks and feasting on the festive flavors. But if you think that you’ve got the gist of spicy and sumptuous North-Indian food, wait till you sample the traditional food of Rajasthan.

Bringing you one such genuinely authentic Indian experience on our Golden Triangle Tour packages is spending Diwali with a Hindu Family in Jaipur. Yes! you heard it right.

Now, you can experience what’s going on inside the million Hindu family homes and how do Hindus celebrate diwali Diwali. Spend the auspicious day learning about the rituals and their significance. Join in on a cooking session to learn about the culinary masteries of Indian housewives preparing traditional Rajasthani food. Pay your references to the Goddess of good fortunes at the Laxmi Puja before proceeding to chomp on the feast of authentic Indian food and traditional Rajasthani dishes.

Such authentic experiences are hard to come by and that’s why Moustache brought you this special gift of celebrating Traditional Diwali with an actual Hindu Family on the Golden Triangle package. With the dawn of a new day after Diwali, the Golden Triangle tour concludes. But, if you want to extend your stay and witness more of the rustic charm of Agra Tourism or Jaipur Tourism, check out our Golden triangle Rajasthan packages. Witness the Thar desert in its full beauty at one of the numerous Rajasthan villages.

The Golden Triangle India tour will introduce you to the fervor and hospitality of Rajasthan culture, Indian cooking style as well as the grand Taj Mahal Architecture. Well, what’s the hardest part about travelling to such amazing destinations at the best time to visit India? That would be, Leaving (sighs)! It is time to end the adventurous trip and festivities by parting goodbyes with family and new-found friends. The trip truly comes in a full circle with a ride back to Delhi, to catch a flight back home.

India, with many countries folded into one, will surely leave an indelible mark on your spirit. Well, after witnessing so much, and experiencing such sensory overloading experiences, believe us when we say, it was just the tip of the iceberg. As you take flight and see this land of enchantment passing beneath you, we wouldn’t be surprised if you are already planning your next trip to India!

The best way to explore India

The Golden Triangle travel package is the best introduction to Indian tourism. Consisting of Delhi, Agra, and Jaipur, it is the most discussed itinerary amongst travellers. Reason being it’s the best way to have a glimpse of this nation’s vast and rich cultural heritage.

This assorted extravaganza allows tourists to enjoy India’s most stunning architectural marvels, complex history, and flavourful cuisines in geographically proximate yet completely distinct cities. Starting from a soulful experience of modernisation in Delhi, poetic romanticism in Agra, and a royal and regal affair in Jaipur; all at their peak during Diwali. So this is the complete blog about Traditional Diwali of Moustache Escapes.