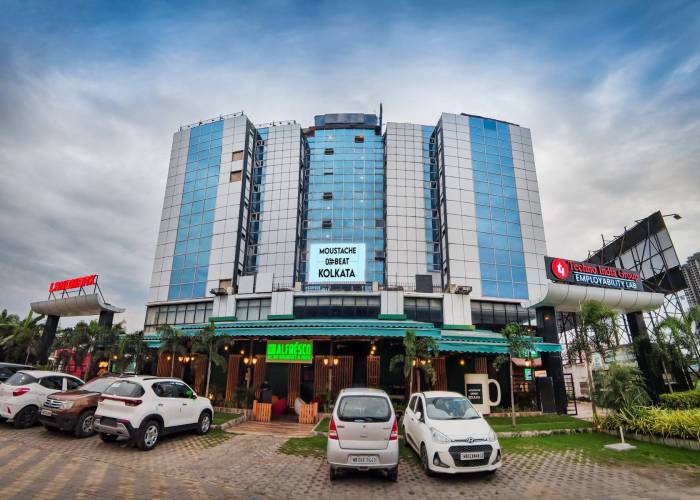 About A Sneak Peak of One Stop Backpackers Hostel Kolkata : Moustache Offbeat Kolkata

This Backpackers Hostel Kolkata is a must-visit whether for work or play. Kolkata has splendid architecture, a vibrant culture and history, and most importantly it has delicious food. As one of the big hubs in India, it’s also well-integrated in terms of business. Hence, you always have a reason to visit Kolkata. That’s why Moustache Offbeat is the perfect hostel in Kolkata for travellers, whether you’re here for a vacation, staycation, or even a workation.

What makes Moustache Offbeat one of the best hostels in Kolkata? Read on to find out.

One of the best features of this Backpackers Hostel Kolkata is that it is close to just about everything. It is easily accessible by road from either the airport or the train station. Yellow cabs or Ubers are available at all times and the seven-storey building is easy to find even for people who are unfamiliar with the city. The hostel has a stunning view of lake Mirania, which is one of the biggest lakes in Kolkata. Best of all, this Backpackers Hostel Kolkata is only a ten minute walk from India’s largest Science City, an interactive and encyclopaedic centre for science enthusiasts.

Putting the ‘beat’ in ‘Offbeat’

Moustache Offbeat Kolkata is the beating heart of the city for backpackers. Every floor of the seven-storey building has something for you to do. Here’s a rundown:

Alfrésco. This diner boasts takeaways and all-day breakfast, all in the open air. The colorful decor and cool ambience make for an excellent choice, whether you want a quick bite or a full meal.

Banquet Hall. All the best events at Moustache happen here. One of our more popular ones is the Stand-up Open Mic night, where comedians from across the city try their hand at drawing laughter from the audience. They’ve left a fair number of people in stitches (figuratively, of course). Another fun event to attend is the dance night, especially if you want to let loose for a bit. You can also book it out to throw your own parties.

Gym and Mixed Martial Arts Studio. These are outfitted with state-of-the-art exercise equipment. Whether you’re a fitness junkie or just looking to blow off some steam, we’ve got you covered. Also on this floor is the Techno India Admissions Office.

Classrooms and Labs. Moustache Offbeat Kolkata takes a new and revolutionary stance on learning, so you can benefit no matter what field you’re in. Go back to your roots in this space!

Co-working spaces. For workaholics or those on a workation, this space is paradise. It’s set up with work-friendly furniture and fast Wi-fi. The whole co-working space is maximised for peak productivity and people can book the space anytime between 9 AM to 9 PM. P.S- People doing night shifts are also welcome to book. Besides, you need to worry about your office belongings. As, you will be allotted individual lockers to store things safely. The place also provides for group meet-ups.

École Intuit Lab. This one’s for the artists. Pursue degrees in all types of design, fine arts, and visual communication, among others.

The most premium dormitory in Kolkata

Dorms and private rooms. Moustache Offbeat offers all types of rooms as accommodation in Kolkata. There are private rooms for those who love to stretch out after a long day of adventure. There are also dormitories for those looking for cosy spots to stay on a budget. The dorms come with individual lockers, a desk to work at, and windows with views out over the city.

Café Up There. This rooftop café offers stunning views of the city and scrumptious food. It’s perfect for hangouts, meals, snacks, or just to chill.

As an added bonus, Moustache Offbeat Kolkata is pet-friendly and even has in-house cats, so you can bring your pets with you on your vacation.

What else can you do in Kolkata?

Okay, so there’s a lot of stuff to do at Moustache Offbeat. But unless you’re here for a staycation, you will probably want to get out of the building at some point. Worry not, we have answers. Here’s a brief list.

The absolute most popular place to visit in Kolkata is the Victoria Memorial Hall, a British era museum. It’s about 8 kilometres away from Moustache via cab and is open from 10 AM to 5 PM on all days of the week except Mondays. Note that the gardens outside the museum have longer open hours from 5:30 AM to 6:15 PM on all days of the week. The museum itself has an entry fee of INR 20 and the gardens charge INR 10 per person. Notably, there’s also a light and sound show after hours with its own INR 20 entry fee. One of the highlights of the museum is the sixteen-foot-tall rotating bronze statue of victory that is mounted at the top of the building. If you’re visiting Kolkata, this is a must see.

Kolkata is a city full of grand architecture, and the best example of this is the Howrah Bridge. Given that it’s a publicly used bridge, it’s free of charge or tolls and open 24/7. It’s 13 kilometres from Moustache, but both Science City and the Eden Gardens lie on the way there so you can club all three trips. It’s also right on the way to the Howrah Railway Station in case that’s your final destination. Now for some trivia: Howrah Bridge is the sixth longest cantilever bridge on Earth and probably the most popular. Why? Well, it sees over 100,000 vehicles and 150,000 pedestrians crossing it per day. Maybe you can be one of them.

The city of Kolkata is also deeply tied to religion. Perhaps the most famous temple in Kolkata is the Kalighat Kali Temple dedicated to the Hindu Goddess Kali. It’s about 10 kilometres away from Moustache whether you go by cab or by bus. Conveniently, there’s a bus going there every thirty minutes and the fare is only INR 9. Kalighat Kali is open on all days of the week from 5 AM – 2 PM and 5 PM to 10:30 PM. There’s no entry fee to the temple. The temple holds a striking and unique Kali idol crafted from sandstone and gold with an even more striking legend behind it. Another must see.

They say the real heart of a city lies in its streets. Clearly, Park Street proves the phrase true. Officially named Mother Teresa Sarani, this street is a hub for restaurants, nightclubs, shopping malls, and more. The street is open from 8 AM to 9 PM on all days of the week. It’s only six kilometres away from the hostel and has no entry fee either, but given the amount of shopping you’ll want to do… it’s probably best to carry some money.

Whichever one it is, Moustache Offbeat Kolkata is the Backpackers Hostel Kolkata for travellers. When are you booking your stay?

So this was the complete blog about Backpackers Hostel Kolkata of Moustache Escapes. Looking for `more fun stays and treks? Check out our blog and our social media.

6 Reasons Why You Should Check-In Moustache Rishikesh

Top 7 Luxury Hotels In Rishikesh To Check-In Right Away