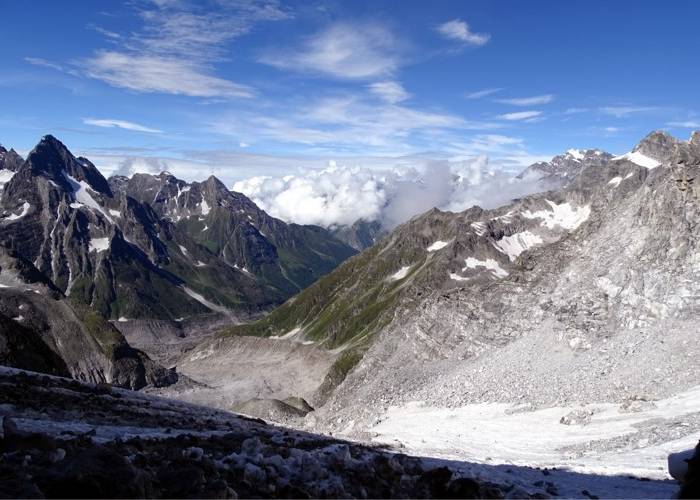 About An Adventure Hike Off the Charts — Bhyundar Khal Trek

As far as trekking in Uttarakhand goes, this is the peak. The Bhyundar Khal pass is part of the Himadri range in the Himalayas, perfect if you are up for India hiking. Discovered by Sir Frank Smythe, it can be reached by crossing the iconic Valley of Flowers and then the lesser-known Tipra valley. The trek there involves crossing icy moraines and snow-covered slopes. In fact, in some places rope has to be fixed to traverse deep crevasses. The Bhyundar Khal pass itself stands at an astonishing 21,325 feet of elevation and offers a view of the Nanda Devi. Excited?

Since this is the best trekking in India for adventure lovers, this trip has a lot of features that you’ll love. Scroll on for some of the best ones.

Tune into your religious side

The Bhyundar Khal trek wouldn’t be a trek in Uttarakhand if there wasn’t at least one religious spot to visit, after all. So here are a few:

Devprayag, Rudraprayag, and Karnaprayag are parts of a series of five great confluences in Hindu mythology called the Panch Prayag. Hindus believe that the meeting place of divine rivers is holy and bathing at these places brings blessings and even salvation to your soul. The Panch Prayag, specifically, are at the places where the river Alaknanda joins with other streams. You will be able to see all three of these confluences while on the cab from Rishikesh to Joshimath. Since you are travelling upstream, you will see them in reverse order: Devprayag, which is the last of the Panch Prayag, will come first while Karnaprayag will come last.

Govindghat is a small but lively town on the banks of the river Alaknanda. While you may not directly see any religious spots there, it is a hotspot for Sikh pilgrims journeying to Hemkund Sahib. It is also only twenty-five kilometres away from the Badrinath temple, further increasing the influx of pilgrims to the area.

The Bhyundar Khal trek may be an extreme adventure trek, but that doesn’t mean it’s not also beautiful. The route is full of places to admire, but the Valley of Flowers and the Bhyunder Khal summit really take the cake.

The Valley of Flowers is well-known as one of the prettiest places to visit in India. The total coverage of over 600 species of flowers in peak season turns it into a starburst of color. In the non-flowering season, the vista of lush green peaks all around leaves you breathless. At 14,000 feet, the breeze and air clarity are the perfect environments to melt your worries away.

The kicker is the Bhyundar Khal summit itself. It offers scenic views to the South, East, and West, so you can get picture-perfect shots from just about every angle. Both the highest and the second-highest peaks of the Garhwal region of Uttarakhand are visible from this pass. Nanda Devi, the higher of the two, is also the second-highest peak in India and is called the Patron Goddess of the Uttarakhand Himalayas. Kamet’s twin peaks are also visible, and popular amongst travellers because they are surprisingly easy to reach for a mountain of that height. But the closest peaks visible are the Nilkantha, Hathi, Nilgiri, and Rataban peaks.

Another great part of the view from the Bhyundar Khal summit is the contrast. The Bhyundar valley, coming from mainland Uttarakhand, is green and often colorful with flora. However, the other side is exposed to the Tibetan Plateau and remains brown or snow-covered. The all-around stunning views are sure to be worth the exhaustive trek.

The Bhyundar Khal trek truly nurtures your thirst for adventure. Up until Tipra Kharak, the trek is pretty easy, but it gets progressively tougher after that. The route both ascends and descends through slippery glacial moraines. Some sections are close to crevasses and require technical gear such as crampons, GPS navigators, or rope to cross. The route also makes its way through several mountain passes and reaches a high altitude rather quickly. For these reasons, only experienced hikers are recommended to sign up for this trek. But not to worry! The trek is designed to allow sufficient time for acclimatization, and a buffer day has been accounted for in case of unforgiving weather. We at Moustache will also provide you with appropriate mountaineering gear and a well-experienced guide who can assist you during the trek. You’re in good hands.

The Saptrishi Pass trek is a good alternative to this one with an approximately equal level of difficulty. The trek follows the same route as the Bhyundar Khal trek up until the Valley of Flowers, where it diverges. The summit is the origin point of the Yamuna, offering a majestic view of glaciers and Himalayan peaks alike. This is one of the treks from Rishikesh that you cannot miss.

The Kalindi Khal trek is a fortnight-long expedition that passes through several mythological and historically significant peaks. The route also passes through several scenic spots in Uttarakhand. The Kalindi Khal itself connects Gangotri and Gastoli at a high altitude of 19,521 feet, which should be right up your alley if you’re interested in Bhyundar Khal. Another must-see to cross off your bucket list.

So, when are you booking your trip?

We will be providing vegetarian food for you throughout the trek, all meals included. We will also arrange your tents and sleeping bags or mats, so accommodations are taken care of. And not to worry, there will be separate toilet tents. Along with the mountaineering equipment, our staff will also carry a safety kit stocked with a portable oxygen cylinder. Since the trek is pre-planned, permits will also be arranged. We’ll handle permits, accommodations, route, safety… What are you waiting for? Reach out and book the trip of your life.

Browse through other treks in Uttarakhand on our site.

Stay caught up with the latest in travel and tourism on our social media and our blog.

Why KEDARKANTHA is India’s Favorite Trek

Top 10 Treks to Do in and near Rishikesh