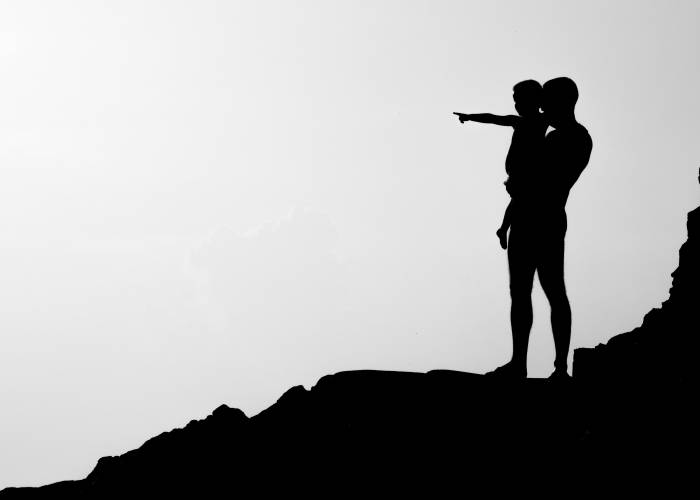 We all have grown up on a steady diet of possessive on-screen fathers who valued izzat over pyaar, bragged about samaj kya kahega, and all other stereotypical Indian dad dialogues.

But finally, movies have changed and have showcased a whole new spectrum of dad-ly emotions that ummm… seems like it was there but never displayed in public.

In recent years, OTTs and films have provided us with some incredible, touching, and beautiful scenes involving fathers and children. Making those conversation sequences so iconic and so relatable to our new-age dads.

Take a read of the following dad dialogues that depict the Man of your house as not just a ruling figure in the family but even more.

‘The Talk’ from Hopper

Stranger Things | Netflix
Hopper was a perfect illustration of how biology does not define parenthood. Parents adapt with their children, and Hopper’s last letter to El demonstrated his desire to change and evolve as a father. The ending of S3 was anyways hard to watch without a tissue box, the letter reading sequence will be worse. A must-watch scene that’ll make you go hug your father instantly. Perfect to rekindle some father-ly bond.

Being Selfish, Being Dad

Yeh Jawaani Hai Deewani | Netflix
Unlike mothers, fathers are not good with words. Our WhatsApp chat history with dad is a live example of that. However, the fatherly concern for his child is well portrayed by Sanjay Thapar in this 2013 Bollywood hit. When Bunny begins to feel guilty about leaving his father in this scene, Mr. Thapar quickly assures him that dad is merely concerned, not upset. He doesn’t want anything, particularly guilt, to get in the way of Bunny’s trip. So it is also one of Dad Dialogues.

Sex Education | Netflix
Our parents, like us, are changing and evolving. When Eric’s father first learns of his son’s homosexuality, he is unsupportive. But, over time, he demonstrates that his worry is based on concern. He doesn’t want Eric to suffer the same difficulties he did when he first migrated. But he also realizes that pushing Eric to change who he is will cause him pain. By the end of the episode, we saw his and Eric’s relationship blossom as they grew closer. So it is also one of Dad Dialogues.

The Family Man | Amazon Prime
Srikant is the prototypical desi dad, who does not recognise his children’s fascination with gadgets. And, just like any other typical Indian dad, he can never stop stressing the importance of saving money and may act severely. He reminds us of our time when every Indian kid heard that famous line quoting dads that ‘Paise Ped Pe Nahi Ugate’. Nonetheless, he ultimately is far too quick to cave in to his children’s demands.

A Quiet Place | Netflix
If you haven’t checked this movie, then there is no better time than Father’s day to watch this masterpiece. A gripping alien invasion story that revolves around a family and their survival in this new world full of monsters. [SPOILER AHEAD] The scene when Lee Abbott is ready to die for his children is a real tear-jerker. Even at that moment, he signs his daughter that he has always loved her. What could be better than that as a pure fatherly moment?

Beautiful Boy | Amazon Prime
The movie beautifully depicted the real-life story of the Sheff family with a meth addict son and a concerned father. Not the usual storyline we find in our daily life except for the worried father who constantly strived to assure us he loves him more than anything and he’ll get over it. Sounds like a familiar emotion that anyone could relate to. The exact words come from him, whenever we feel low or defeated or feel like giving up. Thank you for being there for us, Dad.. Every time.

Finding Nemo | Disney+ Hotstar
Pixar studio is well famed for touching hearts and souls. That’s exactly what it did in the 2003 release animated movie about a father clownfish and the son clown fish named- Nemo. The movie is relatable for anyone who grew up under a pampering dad. However, it teaches that whatever parents do is to protect their kids from the world. But for how long. The movie ends with the notion that everyone at some point has to explore their share of adventure.

Let us know if we missed your favorite on-screen father moment that tugged at your heartstring. Till then, Happy Fathers’ Day, Everyone.

Keep yourself updated with our latest travel story/blog. Discover more on our Blog Page.

So this was the complete blog about Dad Dialogues of Moustache Escapes. Know about our latest travel stories, deals, and offers connecting us on our social media, and don’t forget to share your feedback on our DM! To book our treks, tours, and trip packages make sure to visit our website Moustachescapes.com

Top 7 Things to do During Staycation at Bir