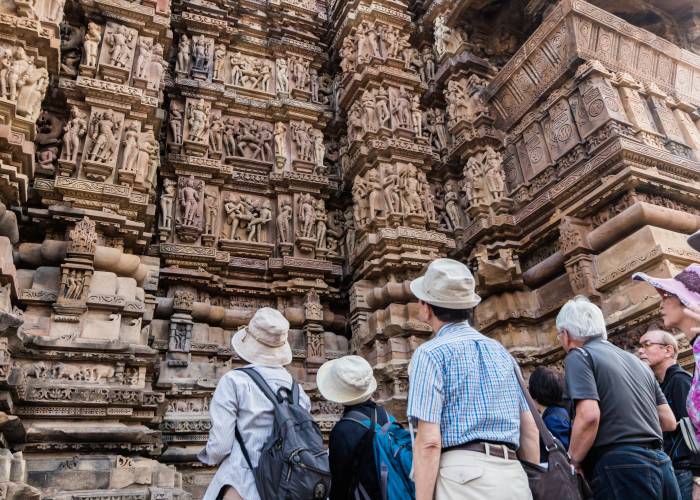 If you have already visited the famous Khajuraho Temple. Or you are planning to visit and want to know more about the places to visit nearby. Well, you are in the right place! To find out about the must-visit place near Khajuraho, just keep on reading. So here we will discuss about Places to Visit in Khajuraho.

Khajuraho was once a sleepy town. It became a UNESCO World Heritage Site in 1986 and suddenly became a tourist attraction. Visitors rarely extend their stay to explore beyond the Khajuraho Sculptures and Khajuraho Mandir. Despite having an abundance of unexplored gems around Khajuraho. So what are these places around Khajuraho we are talking about?

Well, as per local beliefs, it was the beauty of the Vindhya Mountain Ranges that made the Gods come to Khajuraho. It was this beauty that led to the birth of the Chandela Dynasty and gave us the gift of Khajuraho. So, if you are looking for unexplored places and experiences of a lifetime near Khajuraho. Believe us, this place has plenty.

Go ahead and check out these five unexplored places for diverse and intense experiences in the vicinity of Khajuraho:

The Unknown history of Beejamandal

Bija Mandal or Beejamandal is a site unexplored and still under excavation near the village of Jatkara Khajuraho. ASI (Archeological Survey of India), is still excavating on the site and numerous sculptures, idols, and numerous archaeologically interesting objects are still being found today. So this is also one of the best Places to Visit in Khajuraho.

Beejamandal is the ruins of the unfinished temple also known as Vijaya Temple. One can see the freshly excavated objects and structures on display near the site. Interestingly, the site was discovered in 1991. When heavy rains brought down the mosque built by Aurangzeb over the Hindu temple. This revealed many Hindu idols, buried for almost 300 years.

A detailed investigation by ASI confirmed the remains of the ruins of the Hindu Temple buried in the ground. The Temple’s length was around 34.6 meters making it the largest temple of Khajuraho. Even larger than the 30 meters long Kandariya Temple. Beejamandal is a gold mine for the art and history buffs out there.

The knowledge is common among visitors that Khajuraho temples were built by the Chandela Dynasty. And, that Khajuraho served as the capital of the Chandelas during its peak. But a lesser known fact is that during the declining years of the dynasty, they shifted the capital to Ajaigarh. And, The Ajaigarh Fort became the center of power, situated on a hilltop, the fort is one of the most understated destinations around Khajuraho.

If abandoned forts and ruins of old legacy are your things, consider visiting Ajaigarh near Khajuraho. The hidden gem of Ajaigarh Fort is one the ideal offbeat places to visit in Khajuraho for history and art buffs. This magnificent fort is well-known for its rich historical heritage and architectural grandeur, which speaks volumes about the Chandela dynasty.

The Ajaigarh fort is surrounded by the most picturesque Vindhya Hills and offers breathtaking views of the Ken River. Also, take in the views of the beautiful Dantla hills of Khajuraho, from the palace windows and doorways. The plains and farmlands turn lush green and the lakes shimmer with abundant water after a good monsoon. Therefore, adding another reason for Monsoon being the best time to visit Khajuraho.

One of the must-visit destinations on the Khajuraho Sightseeing trip, you should visit the deep gorge and emerald green lagoon at Raneh Falls. Witness the ferocious Raneh Fall, with its green lagoon and red-brown granite rock. On a sunny day, you can also see the rainbow colors in front of the waterfall.

The mesmerizing Raneh Falls is part of a 5 Km long canyon formed by the river Ken. This 30-foot-high Raneh fall can be visited any time of the year. Though you should plan to visit during the monsoon season to witness the true ferocity of the Raneh waterfall.

At a short distance of 21 Km from Moustache Khajuraho, Raneh falls is a short 40 min drive. You can plan a visit to Raneh falls and come back the same day for your leisure stay at Moustache Khajuraho. On your way, don’t forget to check out the Ken Gharial Sanctuary, to witness the majestic “Gharials” basking in the sun on banks of the Ken river.

The Wildness of Panna National Park

The most significant location on our list of tourist attractions close to Khajuraho is Panna National Park. In addition to being a tiger reserve, it is also one of the best-maintained natural reserves in India. The park has a huge variety of migratory and indigenous birds like the Indian Roller, Red-headed Vulture, Crested serpent eagle, Paradise Flycatcher, and much more; In addition to majestic animals like Gharials and four-horned antelopes, only found in this region.

Immerse in the outdoors and wildlife, Panna National Park is the ideal destination close to Khajuraho. The park is 50 kilometers from Khajuraho and is situated at the border of Madhya Pradesh’s Chhatarpur and Panna districts. Within two hours, you could travel there by renting a vehicle during your stay at Khajuraho.

And if you are still looking for a unique experience besides the Tiger Safari, do make a pilgrimage to the Pandav Falls. As the name suggests Pandav falls is a series of natural caves and waterfall lagoons, where the Pandavas stayed during their exile. Pandav falls is a 1 km hike, deep into the forest territory with its entry point located on the road. Pandav falls make for a quick pit stop on the way to Panna National Park from Khajuraho.

Perhaps, one of the cleanest rivers, ‘Ken’ is the most tranquil and revered river in India. Originating in the state of Madhya Pradesh, the Ken river merges with the Holy Ganges in Uttar Pradesh. Many rivers flow through the Vindhya Mountain, although one must experience the beauty and peace of the gentle Ken river.

You can experience the delight of boating on this tranquil river by planning a picnic at several spots along the river. You can also plan to visit numerous dams and viewpoints over Ken River, nearby Khajuraho. Destinations like Benisagar lake, Ranguan Lake, and Gangau Dam are perfect getaways from Khajuraho, for visitors looking for fishing, or taking a dip in the Ken river.

All of these attractions of Khajuraho Tourism are not only lovely but also easily accessible via public transport and cabs from Moustache Khajuraho. If you are travelling to Khajuraho, add these destinations to your list of places to visit. And, with Moustache Khajuraho, get the best out of your trip with trained staff and local guides to help you with everything you need.

So what are you waiting for? Experience the best of Madhya Pradesh Tourism at Khajuraho. Plan your leisure stay at Moustache Khajuraho along with organized trips, safaris, and the best of Khajuraho tourist places.

So this was the complete blog about Places to Visit in Khajuraho of Moustache Escapes. For more information, you can visit Moustachescapes or contact us! Also, follow our Social Media to keep up with the latest travel-related stories.

The Only Therapy You Need is Adventure Activities in Pachmarhi