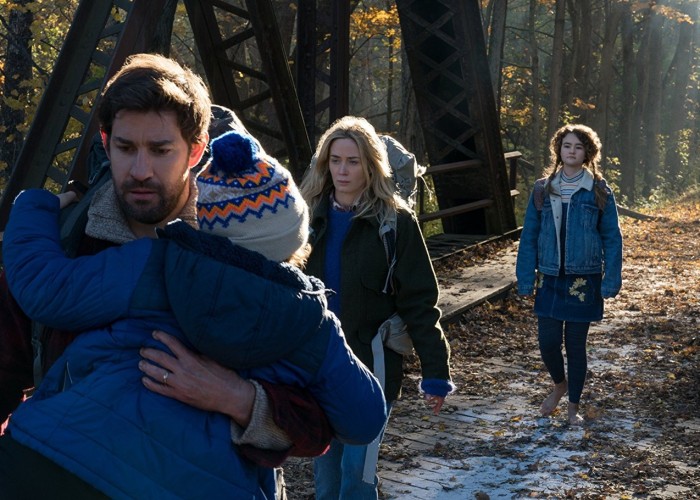 About 10 Movies To Watch During Coronavirus Quarantine Days

Remember wishing to stay at home all day long with internet and food? With so many movies waiting to be marked green on your check list, this is the ideal time when you can finish watching them all. If you already haven’t done your homework to binge watch, then let us help you with some of the best movies to watch during coronavirus quarantine days.

It is a post-apocalyptic world and a family is struggling to save itself from mysterious creatures who find their prey with ultra-sensitive hearing abilities. The story follows as the family tries to survive in sheer silence. The movie has very little dialogues or any other form of sound. This is how the story stands unique in itself!

The story is set in the 1890s where two lighthouse keepers try to remain rationale while living on a far-off and mysterious place somewhere in New England. The doe remain insane until some supernatural occurrences begin to take a toll on them. The movie is one of the best instances where social distancing starts to disturb the normalcy. So it is also one of the best Movies To Watch During Coronavirus Quarantine Days.

The movie revolves around an astronaut Ryan Stone who finds herself abandoned due to a disaster that takes place on her first shuttle mission. She strives to go home and is engrossed in the circumstances as she attempts to get back to some good dry land. This one is an ideal movie to watch while you’re at home during your self-quarantine days.

The story takes turn after a plane crash takes place and FedEx executive Chuck Noland ends up landing on a deserted island. He has no expertise or skills on how to survive in the deserted land. He spends years providing for himself  and trying to find ways to go back. So it is also one of the best Movies To Watch During Coronavirus Quarantine Days.

The movie revolves around the everyday life of four brothers-Saji, Boney, Franky and Bobby who share a love-hate relationship. The brothers lead a messed up life when one day they reunite to stand by Bobby for his love. Their differences take a backseat once Franky’s hope of a happy family starts kindling.

The story revolves around four entirely distinct protagonists. A couple is on the go to dispose a dead body; a young boy awaits his father to come home after around seven years; a teenage son discovers a peculiar side of his mother; a religious man starts doubting over his faith on God. The movie will keep you engrossed as each one is tested in their beliefs in odd ways. So it is also one of the best Movies To Watch During Coronavirus Quarantine Days.

The story is set in the dry and rural landscape of Rajasthan. It revolves around the daily lives of four common women who share a bittersweet relationship. They talk unapologetically on various issues like men, sex and life. Meanwhile they struggle with their individual limitations.

This a light-hearted tale of Philippe, who is paralyzed after a paragliding accident, and Driss whom he hires as an assistant. The two develop a special bond despite being very different from each other. The movie emphasizes on things more precious than money-friendship and health. In the recent times, this is a perfect social distancing movie to watch in quarantine. So it is also one of the best Movies To Watch During Coronavirus Quarantine Days.

Three cousins who always dreamt to live in Bangalore finally arrive there. However, living life in Bangalore brings struggles also. The story unfolds to leading them to discover their true self.

Hamid, an eight year-old boy learns that 786 is God’s number and decides to make a call and talk to him. He desperately wants to talk to his father, who has gone to God’s place as said by his mother. After several attempts, his call is finally answered one day. So this was the complete blog about Movies To Watch During Coronavirus Quarantine Days of Moustache Escapes.

8 Things You Can Do At Home During Coronavirus Quarantine Days

Types Of Dads Everyone Can Relate To